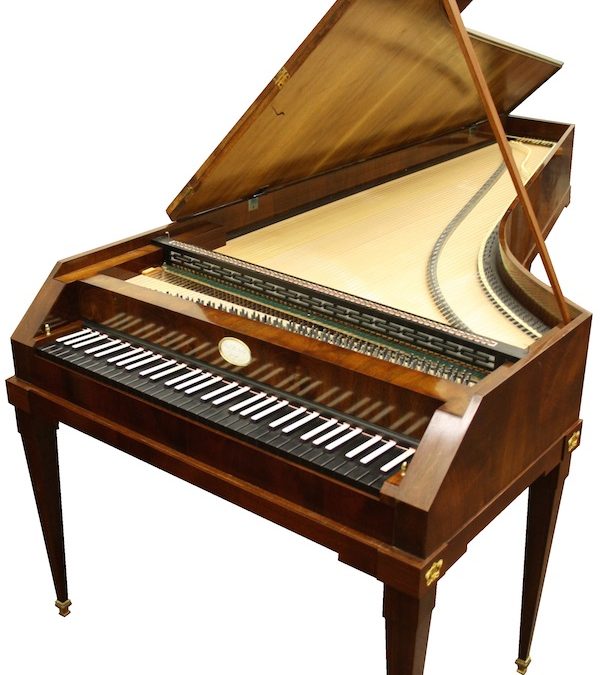 The word ‘fortepiano’ denotes the earlier mutations of the piano, from its invention by Bartolomeo Cristofori around 1700 through the era of Viennese Classicism and into the early decades of the 19th century. By the late 19th century, pianos had come to inherit many of the features characteristic of today’s pianos; the word ‘fortepiano’ does not apply to the instruments of that time, or afterward.
Fortepianos vary greatly in their construction and design, for which there are a few reasons. Firstly, instruments of earlier times were not comprehensively standardised; hand-made instruments not only varied from region to region, but also within the workshop of a single builder, who was usually experimenting with new methods and designs. Secondly, the fortepiano was constantly evolving to meet the needs of its composers, performers and audiences. Despite this variety, there are still a number of common features that distinguish fortepianos from the ubiquitous piano of the present day.

In the late-18th century, two very prominent ‘schools’ of fortepiano building existed in Europe, the Viennese school and the English school. To list further the particular characteristics of fortepianos at this point would require us to distinguish between these two instrument types.
Viennese instruments had extremely efficient dampers (block-shaped or wedge-shaped), which discontinued the sound the instant the key was released. English instruments had purposely inefficient dampers which were shaped like an open book placed pages-down (hence the name ‘book dampers’), resulting in a ‘glowing’ sound after the release of a note. A remnant of this glow can still be heard at the top of modern pianos, where there are no dampers. Thus while Viennese instruments had a more ‘speaking’ quality appropriate for Mozart and Haydn, the English instruments a more ‘singing’ quality (foreshadowing of Romantic long-lined phrases), which Haydn makes use of in his last sonatas (the English sonatas).
Viennese instruments had a much more focussed and clear tone, and clearer distinction of voices. Large chords in the high treble are rarely ever found in the music of Mozart and his contemporaries, as a single note had a much more efficacious quality on Viennese instruments; English instruments preferred thicker and grander textures.
English instruments were bigger in almost every respect – they were louder, heavier, and had a longer decay of sound.